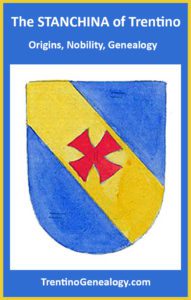 TUTORIAL. How to Use the NEW Nati in Trentino Website (June 2020)

The Autonomous Province of Trento has JUST launched the newly revamped version of their website 'Nati in Trentino', a free, searchable online database of births in Trentino between 1815 and 1923. This NEW search engine is MUCH more powerful, and useful to genealogists. The search features are much more flexible, and you can sort and download the data. In this 8-minute tutorial, I show you what it can do, and how to use it, even if you don't understand Italian.

From genealogist Lynn Serafinn, https://trentinogenealogy.com Nati in Trentino is a free, searchable online database of births in Trentino between 1815 and 1923, created by the Diocesan Archives of Trento. The The recently updated version of the website enables you to EXPORT results from your online search to a CSV file. In this 17-minute video tutorial, I will show you how to export a list from the website, how to convert the raw data into columns, and how to organise it so you can start to create a customised database for your own genealogical research. NOTE: You will need Microsoft Excel in order to do what I show you in the video.

A walk through the historical 'monumental' cemetery of the city of Trento, in Trentino-Alto Adige in northern Italy. I also offer some tips for how to combine what you find in Trentino cemeteries (not just this one) with the online database called 'Nati in Trentino' to bring depth to your genealogical research.

The Comini of Val di Sole: Ancestry, Nobility, and Challenges of Research

RELATED ARTICLE: https://trentinogenealogy.com/2021/10/comini-sole-ancestry-nobility . 5-minute video overview about article 'The Comini of Val di Sole: Ancestry, Nobility, and Challenges of Research'. In this article, I present theories and evidence on the origins of the Comini of Val di Sole, and share some fascinating tales of family of the noble Comini de Sonnenberg, including a MURDER mystery from 1799. From genealogist Lynn Serafinn of Trentino Genealogy dot com.

In Val di Sole, just on the border with Val di Non, is the ancient parish of Caldes. Called 'a noble community' by author Alberto Mosca, many of its families are well documented back to the medieval era. But Caldes also has a true 'genealogical treasure' in its parish registry: a collection of family trees of the ancient families of Caldes made by Father Tommaso Bottea in the 19th century. In this podcast, we will look at these Caldes trees: what families they cover, what the trees contain (and what they don't), how they are organised, and how to use them in your research. We'll then explore some of the surnames of the most ancient families of Caldes, including their historical, linguistic and sometimes geographical origins, as well as the titles of nobility conferred on some of these families.

A genealogical tour of the parish of Revò in Val di Non in northern Trentino, and its ‘satellite’ parishes of Cagnò, Romallo, Tregiovo and Rumo. Lynn will give you a broad overview of how the parish has evolved over the centuries, what kinds of records are available for research, and where you might experience gaps in those records. We’ll also look at some of the common historic surnames associated with each place of these places, and tips for your genealogy research.

Cloz is a small parish in the northern edge of Val di Non of Trentino. This podcast is a supplement to an article published on this website called 'Cloz in Val di Non: History, Parish Records, Local Surnames'. In the podcast, I discuss four research ideas and tips, with specific examples from my research in the parish of Cloz: 1. How History Affects the Surviving Records 2. Using Clues in the Records You DO Have 3. Get to Know Your Ancestral ‘Neighbours’ 4. Don’t Ignore Records that Don’t HAVE Surnames!

Many of our Trentino ancestors tended to stay in one place, sometimes for many centuries. But SOME Trentino families really 'got around'! Long before the age of mass immigration in the 19th century, certain families migrated to many different places within the province. In this podcast, we'll explore the migration of 4 Trentino families, who all have a connection with a village called Fiavé in Val Giudicarie. But the thing is...NONE of them were actually FROM Fiavé. Which families will I discuss? Well, you'll just have to tune in to find out.
1/4

For at least 500 years, my father and his ancestors lived in the parish of Santa Croce del Bleggio, in Trentino, Italy. This is a video of the first time I ever visited the parish church where all my paternal ancestors were baptised, married and buried. In this video you will see the sacred wooden shepherd's cross after which the parish was named, which was discovered on top on nearby Monte San Martino around 1600, and brought to the church in 1624, as well as the 1,000 year old subterranean chapel with 800 year old frescoes of angels on Romanesque pillars. You will also see the 1,000 year old square baptismal font in which all the babies of the parish were baptised for hundreds of years, and remnants of the even more ancient Longobard church dating from around 700 A.D. If you are descended from people of this region, I guarantee they would have been here! Hope you enjoy it.

Duvredo is a tiny ‘frazione’ (even smaller than a village) in Trentino in northern Italy, with a current population of only 94 people. In 1919, my late father (Romeo Fedele Serafini) was born in Duvredo, which had been the ancestral home of the Serafini family since 1685 (we've actually traced the Serafini family back to 1590, but they were in a different village during that time). My father’s family immigrated to the United States in 1923, and he never made the journey to see his ancestral home. But I was truly blessed to have been able to visit it in July 2014. Here's a short video I made where I show the town, the Serafini ancestral house (modernised) and a rare walk-through of an old-style mountain house that is very much the way it was 100 years ago (well...maybe a little messier!).

Via Freri – The Serafini Family Explore their 16th Century Roots

The Serafini of Bleggio had their roots in a different part the Giudicarie, in in a in a village called Favrio, which is the original and most ancient 'zone' within the present-day town of Ragoli (also considered part of Preore in the past). In this 23-minute video, I document our day in Favrio – called 'Freri' in local dialect – sharing the discoveries we made. You'll learn a local legend about the plague of 1630, see breath-taking views of La Chiesa the San Faustino, Monte Irone and Monte San Martino, discover the 'sorgente' (or source) of the mountain spring that gives life to this ancient village, learn about the practice of 'filò' and visit fascinating mountain houses – with their tiny wooden doors and rounded stone archways – built in 1571. You'll hear me huffing and puffing, as this mountain village is just never stops going up, up, up! But most of all, I hope you'll be able to feel what I felt when I walked the same streets and visited the same houses my ancestors would have seen (and possibly lived in) over 400 years ago.

Trento Funivia (Cable Car) - Panorama of City in the Alps

A short trip on the "funivia" (cable car) in Trento, Trentino-Alto Adige Italy. In this video, you will see aerial views of the River Adige, the medieval church of S. Apollinare, Castello del Buonconsiglio, Trento cemetery, the Duomo (Cathedral) of San Vigilio, and a panorama of the alpine city of Trento and the surrounding Dolomites. You’ll see the ride up and down Monte Bondone from inside the cable car, and a few scenes of the village of Sardagna at the top of the mountain. NOTE: this is a home movie, so please bear with the occasionally shaky camera! Filmed in July 2015 by Lynn Serafinn, genealogist specialising in the families of the province of Trentino.

I made this video for my grandsons Percy and Hadrian on 31 Oct 2019, in honour of what would have been the 100th birthday of my late father, Romeo Fedele Serafini (known as Ralph Serafinn in the US). Romeo was born 31 Oct 1919 in the village of Duvredo, in the parish of Santa Croce del Bleggio, Trentino, Italy, and died in Brick, New Jersey on 25 September 2001. When Romeo was not quite 3 years old, he, his mother, aunt and sisters, left their home to join Romeo’s father in Brandy Camp, Pennsylvania in the United States. In this video, I describe what life was like in Romeo’s home village, and the trials of crossing the ocean to a strange, new land. While I made this video for my grandsons, I welcome other family members, friends and descendants of Trentino families to view it as well. I hope it strikes a chord with you. Please leave a comment to let me know.
View More

Ancestry, family trees, research, translations, genealogy advice for those with ancestors from the province of Trento, Italy (formerly Tyrol, Austria)

"One Tree.
One Family.
One Humanity."

Manage Cookie Consent
To provide the best experiences, we use technologies like cookies to store and/or access device information. Consenting to these technologies will allow us to process data such as browsing behaviour or unique IDs on this site. NOTE: We promise we will NEVER use your date for marketing/advertising purposes.
Manage options Manage services Manage vendors Read more about these purposes
View preferences
{title} {title} {title}